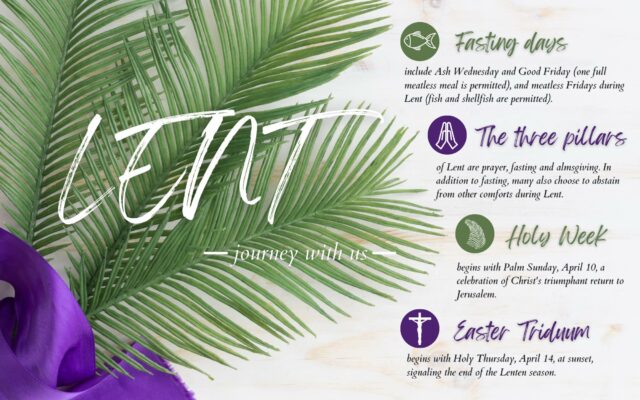 This Sunday is Palm Sunday. We take time at Mass to wander the streets of Jerusalem (and Augusta) with Jesus and see all the brokenness around him. While Jesus was being hailed as the King of the Jews, He recognized that those same people would eventually yell, “Crucify Him!” Even his own disciples, our forefathers and fore-mothers of faith would deny him and run away to hide.

When we read the passion narrative this Sunday we will see Jesus all alone, standing before those who would have Him crucified, and Him forced to listen silently to his false accusers. And when Jesus did open His mouth to proclaim the truth, the guards would slap him for his bravery. They would slap the Son of God, maker of the universe.

I am not too proud to say that I am not a perfect person. I have made mistakes in my life. I have overreacted to other people’s abusive, manipulative, and damaging behavior. I have chosen before to remove someone from the church rather than confront their attempts to destroy my family, my church, and my mental health. To this day, I refuse to make public all that happened despite many Doctors of Psychology who say it must be brought to light.

We have all dealt with these types of people. They continue to “move on” from their perceived slights and wrongs, yet every couple of months they rehash it for the world to see. They yell from the rooftops about how horrible it is to air people’s dirty laundry on social media while doing just that themselves. They are just vague enough in their postings and blogs so that nothing is actionable, yet everyone around them know who they are demeaning and abusing. It is all one simple offense: gaslighting.

What is gaslighting? According to Merriam-Webster Dictionary, gaslighting is “psychological manipulation of a person usually over an extended period of time that causes the victim to question the validity of their own thoughts, perception of reality, or memories and typically leads to confusion, loss of confidence and self-esteem, uncertainty of one’s emotional or mental stability, and a dependency on the perpetrator.” Often the abuser will accuse the victim of lying about them. They may even convince others that anything the victim says is a lie. They distort the truth so much that many of the abusers cannot even keep straight what is truth and what is fiction anymore. The abuser will very often play the victim and when the true victim of the abuse finally gets up the courage to leave, they will either work to shower them with love or continue to badmouth them from afar. This badmouthing is meant to destroy the victim’s support network so that they have to come crawling back to the abuser.

It is the same thing Jesus went through during this coming Triduum. Between the false accusers of Jesus, the lies made up by everyone, and the twisting of what Jesus said, those in religious authority in Jerusalem were using gaslighting to try to break Jesus. Yet, Jesus remained strong. He knew His end was coming and that it was the Father’s will. However, He never allowed the gaslighters to win or to change him.

It is hard to remain firm when those around you try to make you doubt your own sanity. I resolve to try to be more like Jesus. Not to allow their brokenness to break me. Instead, I continue to preach the true message of Jesus, that we must love God and love our neighbor as ourselves. I may not always succeed, but I will never stop trying!