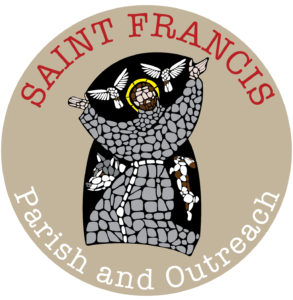 Through Lent we are looking at how the Lenten season reflects the calling of our Franciscan charism. Many people think that living as a Franciscan means being surrounded by animals. While Saint Francis was a huge animal lover and one of the first environmentalist, that was not his entire call. In fact, his call was to the reform the church in ways that not even he completely understood.

In Saint Francis’ day there were so many people who believed that wealth, ego, power, or even intelligence only would get them to heaven. Even the Popes of his day were given over to this way of thinking. They believed that if a person gave enough money to the church, was powerful enough on earth, was a know-it-all, or puffed out their chest enough with pride they would be honored by God and would easily make it into heaven.

As a result, they turned their back on the poor and needy. They abandoned the widows and orphans in their midst. Many of these clergy and laity alike puffed up with their own self-worth declared that they were the only ones with the truth. They refused to help others while declaring that they were the only one God had entrusted the truth of the Gospel with. People struggling in the streets with no food to eat, no home to live in, no love or support were not these clergy’s responsibility.

Today, our world needs a Franciscan revival. Too many people ignore the way they treat their fellow man. They refuse to do what is required of them, instead they work to build themselves up rather than help others. I know of many clergy in the Roman Church and in the Independent Sacramental Movement who would not lift a finger to help anyone while bragging about how great a priest, deacon or Bishop they are. Sadly, they are the modern day hypocrites that Jesus and Saint Francis preached against.

This Lent, as we learn again what it means to be truly Franciscan, let us take a moment to ask ourselves a few questions:

1. Do I run after money, fame, adulation, and the seat of honor?

2. Do I help those around me who are in need financially or who are poor and homeless?

3. Do I ignore my daily duties to those around me (ie. helping around the house or office)?

4. Do I expect everyone to give me everything and for me never to have to work for anything?

5. Do I pass the poor and homeless in the street without even noticing them?

6. Do I have to be begged to help others (if you have to be asked more than once then it is begging)?

If you answered yes to any of those questions, it may be time to focus on others more and less on yourself. Saint Francis was a great model of this humble, servant lifestyle.

Come Sunday afternoon to Mass to learn how to focus outwardly rather than inwardly!